Is David Dobrik Gay? His Girlfriend/Partner and Relationship Details 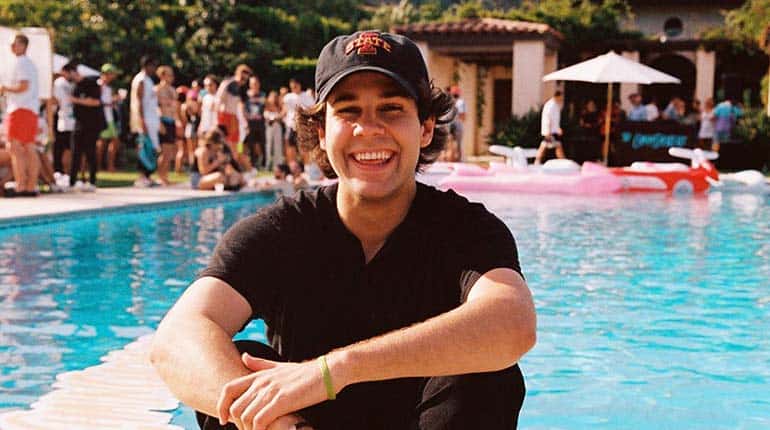 David Dobrik is the brains behind a good number of viral videos on the internet. His quick-cut style videos have garnered him millions of followers and a huge fan-base on social media. However, ever since he was voted as the Sexiest Heartthrob of 2019 by People Magazine, fans can’t help but wonder why he still single. The other half was quick to stereotype him as a gay individual. Nonetheless, David Dobrik has been very open about his sexuality as well as previous relationships, all highlighted here.

David Dobrik is the brains behind a good number of viral videos on the internet. His quick-cut style videos have garnered him millions of followers and a huge fan-base on social media. However, ever since he was voted as the Sexiest Heartthrob of 2019 by People Magazine, fans can’t help but wonder why he still single. The other half was quick to stereotype him as a gay individual. Nonetheless, David Dobrik has been very open about his sexuality as well as previous relationships, all highlighted here.

David Dobrik is not Gay.

David Dobrik isn’t one to hide his personal life from his fans. He is also definitely not gay, as confirmed with his previous three-year relationship to famed YouTuber, Liza Koshy. The couple began dating back in 2015 and shared their first kiss on a rooftop. Liza got a pebble to commemorate the occasion while David stole it and had it fused onto a ring that he gave her. 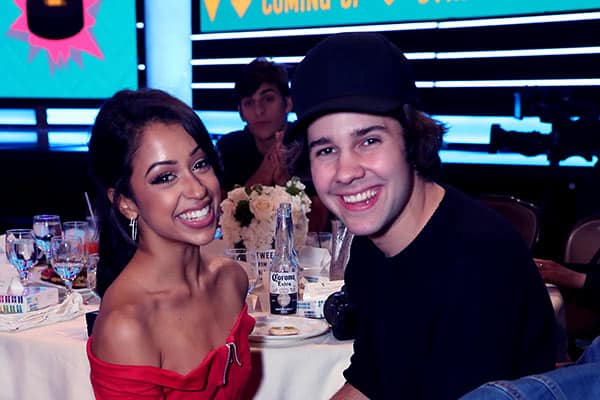 For the longest time, they were the couple that the younger generation looked up to. Sadly, their relationship wasn’t without flaws. Back in June 2018, Liza and David released a heartbreaking video titled “We Broke Up” that explained the couple’s break up, six prior. The reason for their break up was based off on their busy schedules. They hardly had time for each other and ended things amicably with respect for one another.

Other than that, David has also been rumored to be in numerous relationships with other YouTubers such as Olivia Jade, Madison Beer, and Tana Mongeau. He has, however, gone on record to rebuke all these claims and only regards them as friends. David Dobrik doesn’t have a shroud of gay but supports people from the LGBTQ+ community. Moreover, some of his closest friends are also gay. 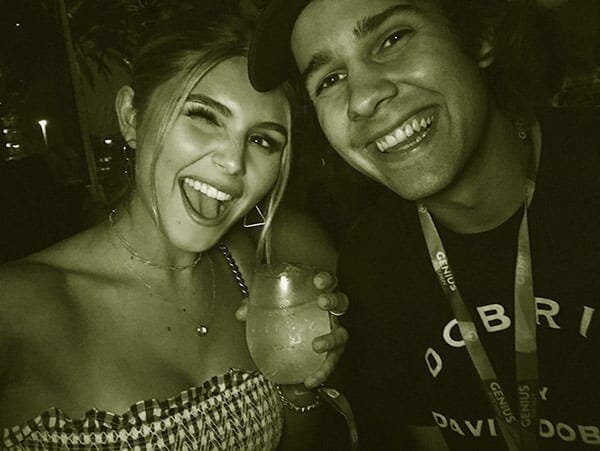 Is David Dobrik Married to a wife or dating a girlfriend/partner?

David Julian Dobrik maybe 23 years old, but he already knows what it’s like getting divorced. Yes, that’s right, David got married and got divorced a month later but only as a prank. Let’s break it down from the beginning.

One of David’s best friends and fellow YouTuber Jason Nash lives to taunt him. Nash told him that he would never have someone to call his ex-wife because no one would agree to marry him in the first place. Dobrik took it as a challenge and flew to Boston to marry Lorraine Nash, Jason’s mother. Not only did he want to prove him wrong, but he made it into a whole shenanigan to become his step-father. 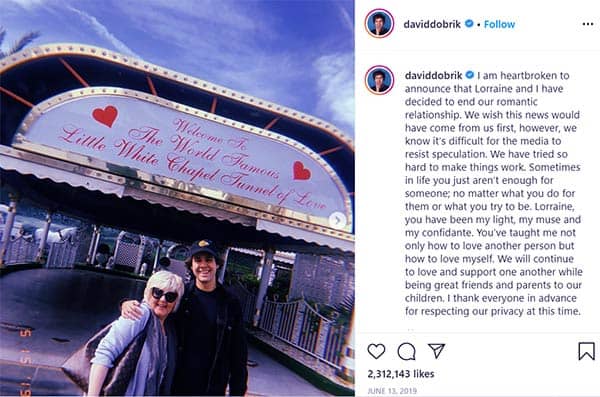 Caption: David announced to end their relationship on Instagram

Lorraine, 45 at the time, agreed to marry him in Las Vegas, complete with a steamy kiss and a honeymoon to Hawaii. However, a month later, Dobrik announced through his Instagram that they separated and divorced on good grounds. The paperwork cost him about $30,000.

Natalie Mariduena also famous as Natalie Noel and the YouTuber’s relationship goes way back during their high school days. Dobrik’s parents had just moved to Vermont Hills, Illinois, and Natalie Noel was the girl next door. He had a crush on her and even asked her out as his date to the school dance. However, he never revealed his true feelings, and the pair remained close friends.

Fast forward to Dobrik’s fame and success; he hired miss Mariduena to step in as his personal assistant. To add the icing to the cake, she even moved in with him at his home in Los Angeles. A few months later, he bought her a car for her birthday in December 2018. Again, he bought her another car in November the following year to celebrate her. 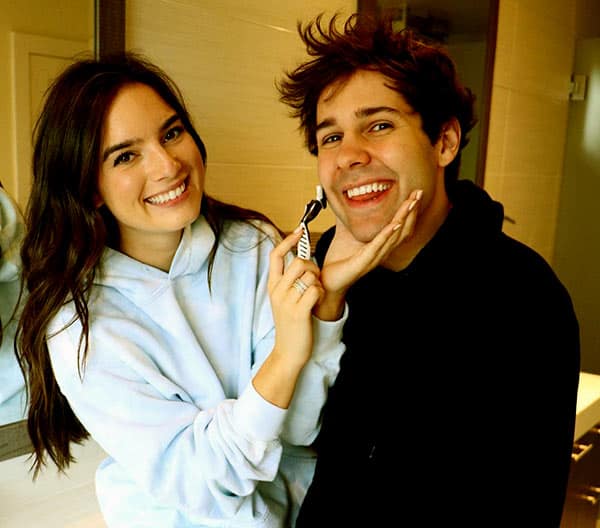 Fans called them out on his romantic gestures but to no avail. He clarified their relationship to Clevver News as platonic and that of brother and sister. When asked who his biggest inspiration was at 2019’s People Choice Awards, he didn’t hesitate but to point out Natalie Noel as the hardest working person in their team. The evidence seems pretty hard to ignore, but for now, we’ll just have to accept his remarks.

David Dobrik is pretty huge on shenanigans and pranks all over social media. He started off on Vine and moved over to YouTube, where he manages three channels. His main account has over 16.3 million subscribers and became the platform’s fifth most-viewed creator channel in 2019 with 2.4 billion views.

Over onto other social networks, the YouTuber has 11.8 million followers on Instagram and 4.6 million others on Twitter. You can also find him on TikTok, where he also uploads viral content and pranks. Lastly, let’s not forget that he is probably the only guy that made podcasts work on YouTube. His channel, Views Podcast, currently boasts of 605K subscribers.