Elton John was born on 25th March 1947 to Stanley Dwight and Sheila Eileen. He is a singer, songwriter, composer, and pianist. His maternal grandparents raised John in Pinner. As a young boy, Elton John went to school in Pinner Wood Junior School. He then went to Reddiford and lastly Pinner County Grammar School. After he turned 17, he left to pursue his music career. Know his net worth right here in this review, and find out if Sir Elton John is gay.

Sir Elton has had a successful music career, selling over 300 million records. He is one of the best artists in the world. He has received five Grammy Awards, an Academy Award, five Brit Awards, a Golden Globe Award, a Disney Legends award, a Tony Award, and the Kennedy Centre Honours. Sir Elton John has a net worth of $375 million.

In 1976, Sir Elton John declared publically that he was bisexual. This means that while he likes both women and men. So the rumors about him being gay were credible. However, on Valentine’s day of 1984 in St. Marks Anglican Church in Darlinghurst, Australia, he married Renate Blauel. He was 36 at the time of the marriage to his 28-year-old German lover.

However, four years down the line, the couple divorced. London tabloid newspaper claimed the union was not even consummated after the wedding because the singer is gay; they say they slept in different rooms. Later on, Elton John released a statement on Instagram regarding his marriage to his ex-wife; he said Blauel was a wonderful woman whom he loved and admired and wanted to be a good husband too. But achieving that was impossible because he would deny who he was, therefore, resulting in divorce.

According to an interview with ‘The Australian’, John describes his marriage to Blauel as influenced by his drug addiction habit in search of change and happiness, and he greatly regrets hurting Renate Blauel, yet he knew he was gay and couldn’t manage to maintain the marriage.

After the divorce, Sir Elton John in Rolling Stone admitted that he was gay and not bisexual. To prove his point in 2014, he married David Furnish his longtime partner. The couple has two sons; Zachary born in 2010 and Elijah born in 2013.

Elton John is married to David Furnish, an English rock legend and filmmaker. John met Furnish in October 1993. The engagement proposal to Furnish was made at a family and friends dinner party in May 2005. In December 2005, they entered into a civil partnership, and on 21st December 2014, after Britain legalized same-sex marriage, the couple converted their partnership into a marriage.

Elton John was opposed to having children in this marriage but with a visit to an orphanage in Ukraine for HIV-positive children, the couple welcomed the idea of adopting a child. But it was not possible to do that in Ukraine because their kind of marriage was not recognized. 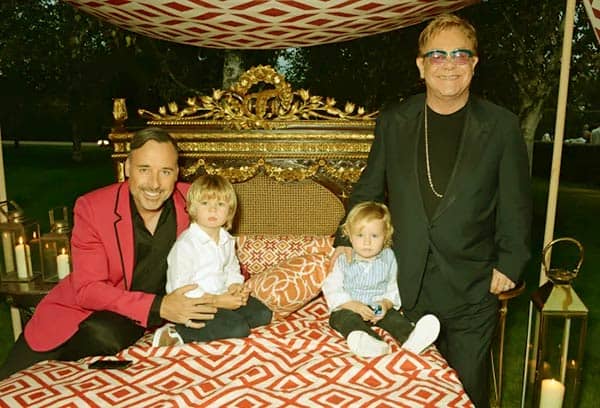 Elton and David with their kids Zachary Jackson and Elijah Joseph.

John lovingly calls his husband ‘Yoko Ono.’ He credits him for saving him both emotionally and financially. John is 15 years older than his husband Furnish. Sir Elton John, who is currently on round shows across five continents concluding in 2021, indicates that this will be his last tour so that he can finally settle down together with his family.

Meanwhile, there have made it a ritual to send each other cards every single week. It’s their way of keeping the relationship alive.

Elton John’s first engagement was to Linda Woodrow, his secretary in the late 1960’s. He mentions her in his song Someone Saved My Life Tonight however it never ended up in a marriage. 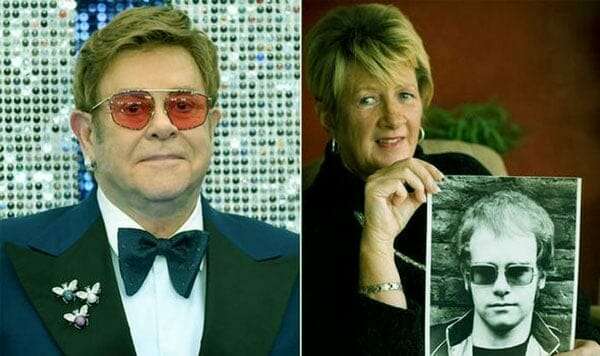 He met Renate Blauel in London in 1983. Blauel is quiet and attentive and had dreams of becoming a record producer. The two probably bonded over their music obsession. Furthermore, Elton John proposed to Blauel on 10th February 1983, and she accepted. Similarly, the musician announced the engagement to the press the following day, and three days after, on Valentine’s Day, they had their wedding. However, four years after the marriage, they divorced.